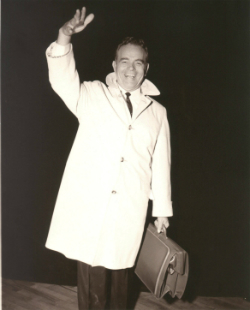 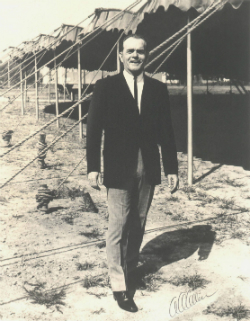 Asa A. Allen was born on a cold and stormy Easter Sunday morning in the small town of Sulphor Rock, Arkansas on March 27th, 1910 into a home where alcoholism was the norm.  As a young adult he owned a dance hall, was the town bootlegger and alcoholic.

Then, he met Jesus and everything in and about his life was changed.  From that day on, his life and focus was God and what he could to do draw himself and others closer to his Lord and Savior.

As the first nationally known figure in the nation to defy the Jim Crow laws in the south and hold integrated meetings, he was the person who opened the door not just to change the culture of the United States, but of the world.

With the largest tent in the world, there was not a spot in the country where the “Allen Revival Hour” radio program could not be heard daily.  Rev. Allen was also the first minister to have a network of Television stations for his weekly program in all the major television markets.  His ministry would take him around the world preaching the gospel.  The year A. A. Allen went on to his reward, LOOK Magazine had Rev. A. A. Allen on their list of “THE TEN MOST INFLUENTIAL MEN IN THE WORLD.”

I would like to say that he was just a wonderful father and grandfather. 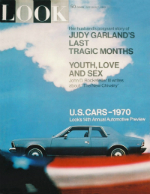