Gene Martin is known throughout America as a pioneer in Gospel Music, A Choir Director, and Evangelist.  His prolific recording career started with A. A. Allen, and he continuous to minister in Word and Song at large crusades and conventions across the country.

The touch of God came early upon Gene’s life.  He was born in Atlanta, Georgia in 1939 into a large family of twelve.  The defining moment that would direct the rest of his life came at the early age of twelve when Jesus Christ  became his Lord and Savior at the Pleasant Grove Baptist Church in Atlanta.  Through the A. A. Allen meetings, and later through his own ministry, he would come to lead thousands of people into the same “old fashioned” experience he had at that altar.   But God’s work was just beginning in his life, and at the age of fifteen Gene experienced the infilling of the Holy Spirit. Soon after joining the church Gene began singing with the junior choir, and there it was that he fell in love with Gospel singing. He determined in his heart to make it his life’s ministry.

As the years passed, Gene began singing with Gospel groups around Atlanta, taking occasional trips out of town for conventions and other church meetings. In doing this, he was preparing himself for a greater ministry in the Lord’s service which he knew the Lord had for him.

In May of 1960 his dream came true, for that year Gene first sang under the A.A.Allen Revival ‘Big Top’ tent. 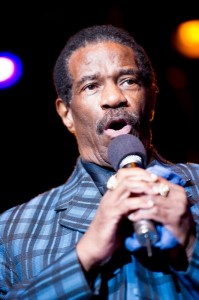 Soon thereafter he left his home, family, friends and his job and began travelling full-time with the Allen Evangelistic party to sing the Gospel of Jesus Christ.

Soon Gene’s unusual style of presenting the Gospel in song spread throughout Pentecostal circles. His first appearance with the Allen party in Chicago, Illinois, won him a place in thousands of hearts. That success spread his fame throughout the country.  He would go on to work with Don Stewart, worked with the world famous Malaco gospel music label.  He has been featured on many of the largest Pentecostal platforms of the country, and was a featured artist in Carlton Pearson’s Live at Azusa recordings.